In February 2018 I decided to cycle the CARTEN100 which was happening only a few months later. It was the first time I had taken part in a ride that was over 100 miles. I was relatively fit after some recent marathon training and was looking for a challenge that I could achieve on my own. It ended up being the best social sporting event I have ever done!

I have always been a long-distance runner and more of a ‘fair-weather cyclist’ the CARTEN is labelled as a ride and not a race and I hoped it would less competitive and let’s be honest, less aggressive, than some of the other sportive’s I have taken part in, in the past. 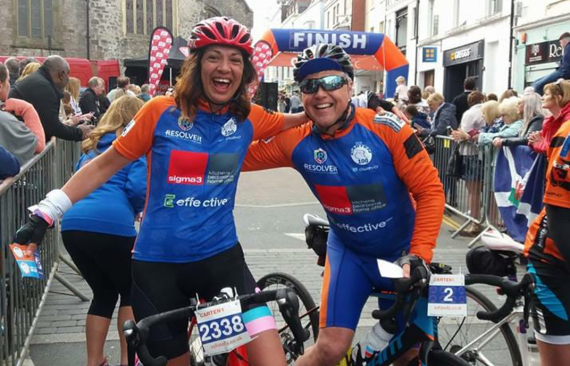 It felt daunting turning up on my own, all my family and friends were at the finish, however, I was immediately chatting to a small group of cyclists in the starting pen and I ended up riding with them the whole way!  I also quickly realised that the CARTEN was something very different when we stopped at Baglan to eat a bacon sandwich, before heading off to Bury Port, for the much talked about “Pint and Curry”. After Bury Port the ride started to undulate up to the top of Red Roses hill and it was there that half the group I was with were greeting me with a pint of cider.

The last 10 miles… seem to be more like 20 miles, I could have sworn the miles were going up and not down! I had started to get a tired and was thinking about “Getting that lift” and at desperate points… could I hitch a ride from a passing van!? But the amazing camaraderie, humour, conversation and support from other riders motivated to me stay on my bike to the finish…

An Endurance event with bacon and beers

At some point later that day I saw the sea…  the Tenby sign and before I knew it, I was freewheeling into Tenby to the sound of cheers, my family and another pint!

I have never taken part in an endurance event quite like it. CARTEN100 is an endurance event but with bacon and beers and has a community spirit for the whole distance. It was refreshing to take part in something that’s not timed, and you can appreciate how far you have cycled.

For days after, everyone asked …. how long did it take you? Honestly, I don’t know, it was more of a long distance social… and was definitely the most enjoyable sporting event I have been part of and will be back for more!

How you can help!

CARTEN100 has two main objectives, to set an achievable challenge for novice riders to encourage them to become fit and enjoy cycling, and to raise money for good causes – in 2018 we celebrated a million pounds raised. If you'd like to learn more about sponsoring our annual event and the amounts we have raised for charity each year so far, please get in touch!

Find out more Get in Touch